Staff member
Moderator
Club Sponsor
I’ve just received a Rolex for my birthday from a couple of my friends, who are lesbians. I guess they misunderstood me when I told them I wanna watch.

Staff member
Moderator
Club Sponsor
The Highways Agency found over 200 dead crows on the M4 near Bridgend recently, and there was concern that they may have died from Avian Flu. A Pathologist examined the remains of all the crows, and, to everyone's relief, confirmed the problem was NOT Avian Flu. The cause of death appeared to be from vehicular impacts. However, during analysis it was noted that varying colours of paints appeared on the ...bird's beaks and claws. By analysing these paint residues it was found that 98% of the crows had been killed by impact with lorrys, while only 2% were killed by cars.
The Agency then hired an Ornithological Behaviorist to determine if there was a cause for the disproportionate percentages of truck kills versus car kills. The Ornithological Behaviorist quickly concluded that when crows eat road kill, they always have a look-out crow to warn of danger. They discovered that while all the lookout crows could shout "Cah", not a single one could shout "Lorry"

What religion do you identify with?

And to think that when I was at work we all got an email saying it was not helpful to put 'Jedi Knight' as religion when answering employee surveys. By the time I left the Jedi make up of the staff was well over 40%. Can't think how that happened........

Jaws said:
One for you to work out... 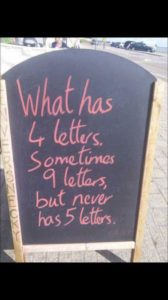 And kept me up all night. And I still don't get it.

andybirdless said:
And kept me up all night. And I still don't get it.
Click to expand...

Jaws said:
Here is a clue rather not so much a clue as an explanation
View the words as a statement of fact
Click to expand...

Jaws said:
Here is a clue rather not so much a clue as an explanation
View the words as a statement of fact
Click to expand...

As in " How High is a chinaman and Who is his brother " ?

I might be missing so,etching John - your last couple of posts have shown as "IMG" in text only?

andybirdless said:
I might be missing so,etching John - your last couple of posts have shown as "IMG" in text only?
Click to expand...

Same for me as well

T.C said:
Same for me as well
Click to expand...